We have got the company's permission to catch the whole plant and the whole production process on film. During spring and summer 2015 I have been there many hours with my camera. The ambition is to document all moments in the process, and all employees.

The goal is a film that shows the work done in the paper mill. Now I have cut together everything useable separated in three parts: the production process, employees at work, and a walk around the plant as a whole - there are big areas not in use. The result is 90 minutes long, which is to much, but is necessary as the company had to decide what I can be allowed to show. This permission I got before their summer closedown. Now all employees caught in picture have to decide if they accept to be within my films.

One first version will be on show at our first exhibition in September in Dals Långed. I will not have the time to cut down the material into a more viewerfriendly version till then. But I hope to interview some fired workers later on, and include their histories into a shorter documentary.

"Table top" is the name of the niche the company produces in. A problem for me when cutting the films is that the pulp as well as the finished paper comes in more than twenty colours, and that this is obvious in my film parts. How to present a whole without giving the impression that the colour varies during production, is a tough nut. 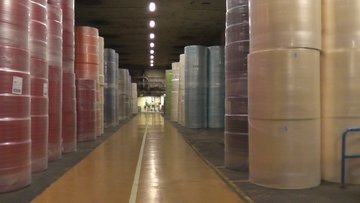