Where: At the red storehouse near the railway station in Dals Långed

A mix of sound installation, concert and exhibition aiming at a sound and light experience. It was built on sounds caught at Rexcell, the now closed down paper mill i Långed. Industrial sounds are mixed with compositions and sound scapes for musicians. This was enclosed in lightdependent scenography. The musical focus was on sonorous sound and improvisation on both unusual instruments like the Teremin and Hapi drum,and usual like guitar.

The program was 40 minutes long and was looped many times during the five hours. Every loop was different from the other ones.

Watch video from the event here.

Sound manifestation 31th of October at 19.00

Where: The roof of the paper mill Rexcell in Dals Långed.

The papermachine TM2 was planned to stop the 31th of October and a 150 year long tradition of industrial work was broken - perhaps to give place to something else? This short and intensive sound manifestation from the roof  reminded us that this was a special day.

This sound event was a collaboration between two projects both partly financed by the VG-region: Långedsprojektet and  Slagverksensemble (Percussion ensamble).

The musicians were in both cases Stefan Halvordsson, Jörgen Moberg and Peter Halvordsson.

Watch video from the event  here.

The process of making the 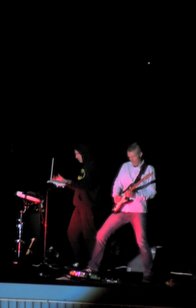 Photo from the sound manifestation October 31, 2015, from the roof of the paper mill.